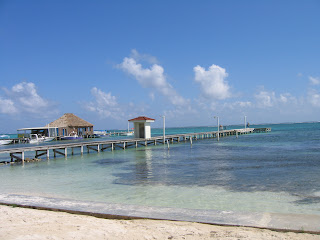 For the purpose of this blog, I'll just call the little guy "D" going forward...
Before the tornado called "D" was in our consciousness, we scheduled a little vacation to Belize with MK and Tom (Bill's sis and bro in law) on the week after Thanksgiving. When we got the referral, we considered cancelling so that we can keep working on the dossier. However, because we had a few other lagging things that we were anticipating to just be arriving in the mail that week, we thought we would take the opportunity to go on vacation, our last hoorah, so to speak, before D forever changes our lives.
Little did we know that at this point, it was too late. He already has. While in Belize, I was constantly thinking about the dossier and what else we can do to make it go faster. I checked my emails several times a day for info from our homestudy (more on that in a bit). It also didn't help that the first 2 days we were there, it poured so we were sort of stuck in the house with nothing to do but dwell on the fact that if I were home, we could be calling people, not using up precious paid time off from work, working to get my department ready for my upcoming leave, etc.
And for the crescendo of my despair, our homestudy agency, which we knew a week or so before we left for Thanksgiving, was closing their doors and transitioning their families to another agency in the area, sent an email stating that they could not release the official notarized copy of our homestudy because we had to do the DOJ and Child Abuse fingerprints again under the new agency's license. They said it was something that the state of California mandated. LIVID could not start to do justice to the state I was in! This could not come at a worse time. We needed to send the dossier out as soon as we got back to the states (assuming some documents were in our mailbox when we got back - which they were). Redoing the fingerprints could mean another 2 weeks before the new homestudy would be issued. We were in Belize and would not be home for almost another week to redo the fingerprints.
I called the new agency from MK's cellphone and stayed on the phone until I was able to speak to the director of the new agency. To her credit, she was wonderful. She communicated to me that they had nothing to do with the old agency's closing process. All her agency is getting are the cases as is and hiring some of the staff from the other agency. Nevertheless she understood our predicament and was very willing to be creative to find a solution to get us through this phase. After much brainstorming, we decided to have the homestudy issued under the old agency's license which was still active but expiring the following day. Then, we would have to just send amendments to correct the records to the new agency. This meant I had to call our social worker who immediately agreed to go to the agency's offices the next day with several originals that he would sign and get notarized.
So the end of this story started out much better than the beginning. Largely, this is because of the wonderful people who were willling to go the extra mile to help us get D home sooner. From our social worker BW, to the director of the agency LJ, my sister in law MK, Tom who kept positive and tried to be cheerful in the midst of my hysteria, and to Bill who kept chill, and didn't quite jump onto my hysteria bandwagon.
The weather cleared up on most of the days following. Bill who had gotten sick at the beginning of the trip finally started to feel good enough to walk around town and enjoy the sun and the town. We even got some snorkeling and swimming time in and saw a bunch of really cool marine animals and corals.
One day, we are going to bring D to this amazing place. I can't wait!!!!
Posted by Ivy Lee at 8:16 AM