A Blanket for Baby C 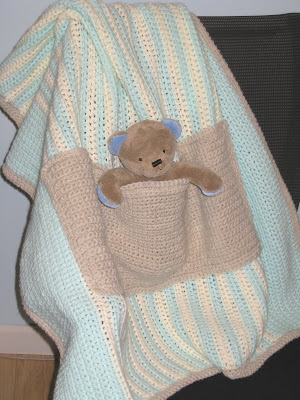 I'm one of those people that if you give me a Christmas present a week before, heck, a day before Christmas, I will not wait to open it. I actually physically can't. I think it is some form of OCD. Then, I'll feel so goofy so I'll actually attempt to wrap it back up and open it again on Christmas. When I do open it on Christmas, I feign a totally surprised look. In reality, I'm just as excited then as I was during the sneak peak. My family gets a kick out of this.
However, I do think that it is this same OCD that is making this wait really, really, really hard for me. I had a sneak peak of D in December, and leaving him back there at the baby house is like wrapping him back up. Sadly, Christmas was supposed to come very soon but Santa just won't cut us a freakin' break. Maybe his big, fat, red velvet ass got stuck in the chimney, or perhaps he ate too much and took a long nap instead of jumping into his sleigh. Hopefully, he will get his shit together and start delivering again soon. We've been really good this year, a little naughty but good nevertheless.
Anyway, this is why I am posting a photo of this newly finished blanket. It is actually for my new friends in Tennessee who are also waiting in the wings for that all elusive news of a court date. I told Kat it was going to be a surprise, but I'm just too excited about finishing it and sending it off. I don't think she reads my blog so maybe my surprise is safe. I hope she doesn't decide to start reading my blog now. If she does, well,... she'll see it in person in the next few days. It's kind of like me opening the present early and then wrapping it back up, then waiting until Christmas to open it for good. (Wow, I'm getting a lot of creative mileage out of this OCD thing of mine).
And after reading Suzanne's post, I'm sending this via Fedex and not DHL.
Posted by Ivy Lee at 11:54 PM

That blanket is gorgeous, Ivy. She will love love it :)

Yet another lovely blanket!

I hear you about the OCD thing with presents. I thought I was the only one that did the re-wrapping/feigning surprise thing. And you're so right! It is just as exciting on the second opening :)

BTW -- the present thing -- every year since I can remember. My parents just recently told me that they knew all along