In the last 2 weeks since my last post, so much has happened and has left me unable to keep up with anything.

Our great friends, the Herzogs threw a "Welcome Dylan" party at Santa Margarita Park in San Rafael. It was a wonderful day of fun. Dylan had a great time meeting everyone, hanging out with friends and playing with new toys. 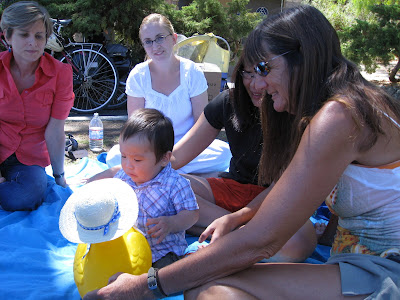 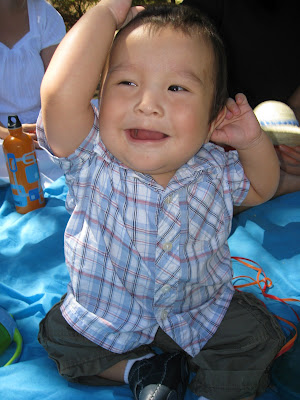 For some reason, we couldn't get a good family photo. It seems none of us can coordinate looking at the camera at the same time. 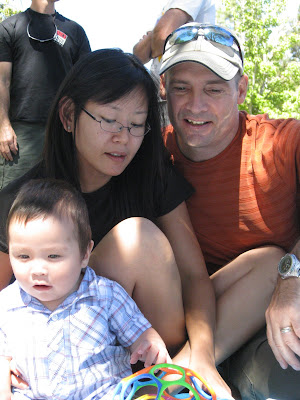 He has managed to get everywhere using his combat crawl. He has gotten so fast, we finally accepted that we now have to babyproof everywhere. The other day, he discovered how much fun vertical blinds can be. 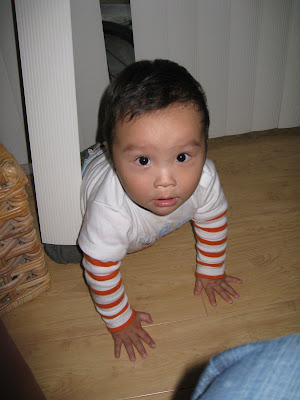 He finally decided he liked his rodeo rocking horse. We can't leave him on there on his own because he can't reach the stirrups and he still slips sideways but it won't be long now before I am sure he will decide to climb up. 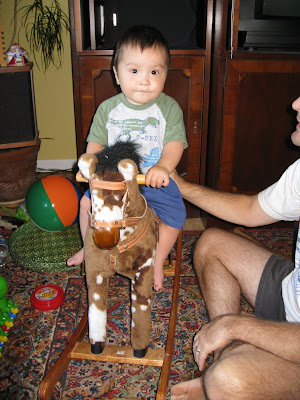 At his well baby exam, he clocked in at at almost 24 lbs. He is in the 75th percentile in weight, 50th percentile in height and 90th percentile in head circumference. OK, he has a big head, but I hope that means his brain is growing well. He is doing great overall. His pediatrician says he is on track developmentally as well. We are really thrilled to hear all that. 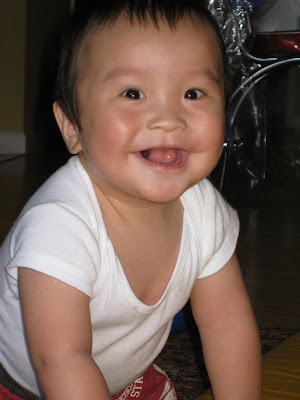 I have also gone back to work and was torn up about leaving Dylan at daycare. Here we are on the first day. Dylan did great at daycare. He ate well, napped, and entertained. His new caregivers kept telling me he is such a good boy. When I picked him up that afternoon, he cried for a second when he first saw me and then reached out for me and started giving me the biggest smiles of relief. However, when he got home, he was the crankiest and clingiest we have ever seen him. I couldn't leave his side. I had to be in touching distance at all times or he cried. I guess you can say he is bonding well with us. The sencond day at daycare was only slightly better but he was still pretty overtired and cranky when he got home. I really second guessed our decision to put him in daycare. Not that we have too much of a choice, but it was hard. It is getting better, but I feel like he may have thought that if he let us out of his sight, we would leave him again for hours and hours. 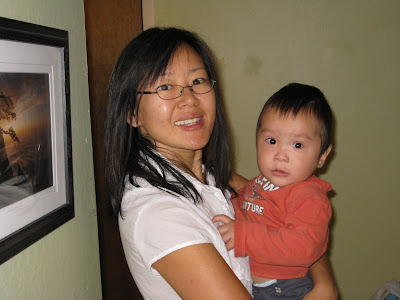 He got a new crib because this poor little guy has outgrown his porta crib. He kept ending up in one corner and we kept having to move him. So, we finally gave in and decided to get him a new crib. He seems to like it a lot. He can't shake it as hard because there are no wheels on this one but he has learned to pull himself up and stand. 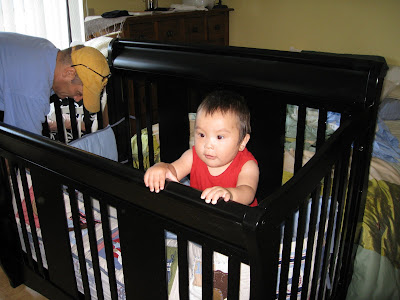 Overall, it has been a crazy 2 weeks of changes in the Lee household. And it doesn't show signs of letting up. Next weekend is Auntie Joanne's Bridal Shower in L.A. The following week is our appointment at the University of Washington. The the following week is his birthday party. Then the week after that is Auntie Joanne's wedding. Oh my goodness, we will be relieved when all this is done in mid October. Then we'll have a little breather before Halloween and the holidays. What have we done?
Posted by Ivy Lee at 10:57 PM

What have you done? Fallen headfirst into parent-land!!! And you seem to be doing fantastic! I love seeing photos of Dylan. I was about to get withdrawal. Thanks for sharing more new photos of the your most handsome Kyrgz boy!!

Wow! What a big and handsome guy he is! Don't worry too much about the daycare transition. We went through that with our first son and it turned out just fine. It's great that he shows you that he missed you!

What a wonderful report on his growth and development. Your little man looks wonderful :)

Gosh he is growing so fast......glad to see him doing SO well!

Walking is in his future!

Gosh he is growing like a weed. I see walking in his near future. He has grown so much since we saw him at the BBQ.

Good news about his growth. Thanks for the post. I love to hear updates!

Gosh he is growing so fast......glad to see him doing SO well!

Walking is in his future!

It's bittersweet, they grow sooo fast! One day they look like a baby, the next day he's a boy:)
He looks fantastic and happy, despite daycare! It's mom we worry about:)