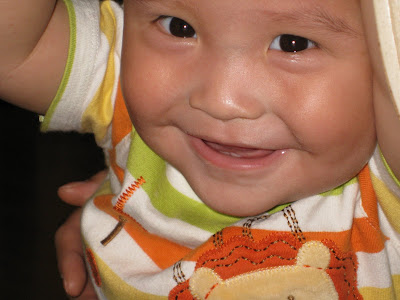 In the last 3 weeks, Dylan has suffered a long resilient cold, a double ear infection, rashes on his palms and knees, and 2 new upper teeth. And he managed to learn to crawl on hands and knees overnight.
We drove to L.A. for my sister's bridal shower last week and got in at 1 am on Friday. We hoped Dylan would stay asleep in the car for the entire ride but we had no such luck. Instead he woke up 2 hours before we got there. As soon as we got to my parents' house, he decided he was ready to actually crawl instead of slither. All this at 1 am. Wide awake and crawling and happy as a clam (how happy are clams and why?) Who would have thought?

Well, the cold that he has had for a couple of weeks turned into a double ear infection, much to our dismay. He tried so hard to be his happy self but with the fever and the earache, he was a little cranky on Saturday and extremely cranky on Sunday. He also developed a rash on his knees and palms. We think he may be allergic to the Persian rugs at my parents' house, but who knows?? The advise nurse says that if he was allergic we would know because he would itch. There were no signs of any itching. She also said some viruses that cause ear infections also produce rashes. I suppose we'll find out next time he crawls on those rugs.
Don't get me wrong, Dylan managed to have himself a wonderful time. He got to go swimming in an 85 degree pool, got a bunch of attention, new toys, new clothes and got fed incessantly. The Motrins and Tylenols didn't hurt either. 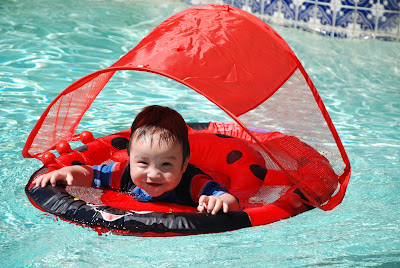 The good news is that all is better now that the meds have kicked in, just in time for his birthday tomorrow. I can't believe he is going to be one. I sort of want to suspend time right here. Since that is crazy talk, I'll just take loads of photos so I can remember these days.
Posted by Ivy Lee at 8:25 PM

ONE???? How???? *smile* He is absolutely adorable and it's great to see the progress he is making. Even sick, he appears quite happy in all his photos. Give him an extra hug for me. I wish I could in person!!

I can't believe he's one already. I've still got that lovey blanket that I made for you sitting on my sewing table that I keep meaning to send... now he's a big boy though!

Sorry to hear that he's been under the weather and hope he's all well soon!

Happy Birthday, Dylan!! He is so cute, Ivy. Another little Kyrgyz heart-breaker :) Congrats on the crawling...you know what comes next, right?

Glad to hear he is on the mend.

OK, I am reading this late, but I am so excited to see the cute video of Dylan crawling :) Sorry about his ears, but I am sure they are all better by now :)