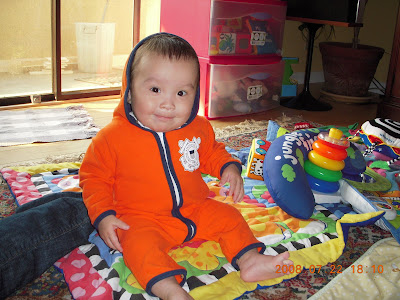 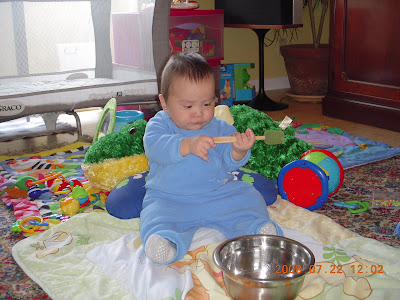 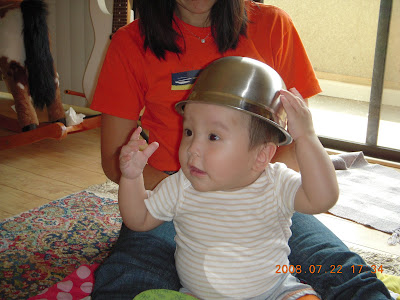 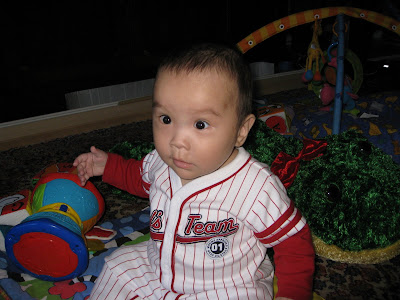 Maybe Dylan can have a career with the Coast Guard. I think G-Pa (short for Grandpa) would like that. He would probably say that it all started when he bought Dylan this outfit. However, Grandpa Bob may argue that the Navy is better.
Or maybe a chef? Yep, Dylan loves this mixing bowl and spatula.
Or a comedian?
What about a baseball player?

In all seriousness, we play these dress up games with our kids and it reflects our hopes and dreams for their future. We are hoping they find something of interest and develop a passion. I can't help but think of Dylan's world here compared to what it would have been if he had stayed in Kyrgyzstan. This isn't about him having to be grateful for being adopted and having these windows open up to him. As a mom, I am just so thankful that he is ours now. We aren't wealthy or affluent in the highest of social circles, but what I know for a fact is that we will try our darndest to make sure opportunities are present and that we encourage him to pursue his passions (as long as it isn't serial murdering, or money laundering or something along those lines). And the fact is that in the short period of time that he has been home with us, so many people, aside from Bill and I, have also fallen in love him and will be there for him in the future to support him.
And oh by the way, I win the "Worst Mommy of the Month Award". Dylan fell from his changing table yesterday while I was changing him. I had one hand on him and the other hand reaching for his shirt and he rolled over and fell to the floor. He cried for a minute or two and then played like nothing happened. My stomach was just twisted up in knots for the whole day and even today. We went to the doctor just to make sure he was ok and he is. Nevertheless, I feel like the crappiest mom of all time. I am sure that all those other moms before me who have been to the Minor Injuries Clinic feel the same way. If I can manage to keep my son alive, maybe he will have a career of his choice after all!!!
Posted by Ivy Lee at 3:19 PM

Ivy- I think we all have our "worst Mom" moments. I've had at least one with all 3 of mine!

You know what, you are most certainly NOT the worst mom -- look at that photo and all those toys and the posts you write with such love. It was an accident.

Oh, and I am another one of those people who have "fallen in love" with Dylan. He is just a doll. Maybe we could work one of those arranged marriages between him and Ellie -- years down the road. :-)

Hey Ivy
I let Claire roll off the bed last week. Does that make you feel better?? ;)
She, like Dylan, is just fine.
So can I join the Worst mommy club??
Karen

Oh, Ivy! That must have been scary. But you know, I have a friend who had the exact same changing table incident with her son. And he was just fine, too. I think babies must be extra bouncy.

All this reminds me, though...I must by an area rug for the floor in front of my changing table!!!

Ha! Kenzie climbed out of her highchair! Splat! On the floor. Shaun and I were right there, just absorbed in our own conversation. She's a quick little bugger she is. So I think you have company in the worst mom club- dont worry abut that!

You are not the Worst mom, I was just visiting a friend tonight and we were talking about these "near misses" it sounds like we all go through them! Dylan looks great in Orange I must admit, but he is also very cute playing with the kitchen tools :)