OK, so I stole that title from SNL...

So much has been going on. I haven't had time to update.
Well, Friday was my last day at work. I am officially on leave. After spending a few weeks of just working my butt off training my replacement Controller and handing off projects to other co-workers, I am finally done with 60 hour weeks. Pheeeeww! I have to admit it is quite a relief but I have only had 2 days to mull over this new leaf and these 2 days have been quite busy.

On Saturday, my SIL Mary Kay had her birthday celebrations at Sam's in Tiburon. Sam's Anchor Cafe is this great fish place right off the water in Tiburon. She, her husband Tom, one of her best friends Debbie and Debbie's son rode their bikes from the Presidio, across the Golden Gate Bridge and over to Tiburon (about 20 miles). Some people were smart and decided to drive directly to the restaurant. Being the freakshow who is terrified of bicycles, but less so of big choppy waves, Bill and I decided to kayak from Sausalito to Tiburon to join them for lunch.

It was a gorgeous warm day in the SF Bay Area. It was perfect, up until we crossed Richardson Bay and headed towards Point Belvedere. Since this is my first day out kayaking this year, I was a little nervous. So to go around the point, we usually have to thread between the coast and a large rock and in between these are smaller rocks that you don't want to hit with your kayak. Well, at the last minute, I chickened out and decided I couldn't risk putting a hole in my boat. I decided to take my chances and go on the outside. As soon as I looked to my right, I just saw some wild waves from all directions. There were waves that are caused by the current. There were waves bouncing off the rocks to my left. There were waves that were wakes from big boats and they all kind of converged where I was. To top it off, I was already nervous, hadn't had a thing to eat all morning (it is now about 12:40 pm) and just didn't want to have an accidental swim and show up at the restaurant looking like a wet rat.

So after a lot of hard paddling, maneuvering and grunting, I make it around the point which now should be somewhat calm. Well, it was calmer but not quite calm. The water was swirly and confused from the current the ferry boat wakes and who knows what else, possibly my tummy grumbling and causing vibrations in the water. But we did make it safe and sound to Sam's. So after tying off our boats, both Bill and I cranky from hunger, we go up to the restaurant to meet up with everyone else. It ended up being a really nice lunch for Mary Kay. We also ran into some friends and their baby Russell. Oh so cute and not far in age from Dylan. Can you say, boating buddies of the future? So, after much chatting, we head back and have a nicer, less wavy ride back to Sausalito and sit in an hour and a half of traffic to get home.

Sunday is the Bay to Breakers run where we run from the San Francisco Bay, across the city to the Pacific Ocean side. This is the 97th year and every year, there are world class runners, avid amateur runners, regular runners, walkers, people with their baby strollers, naked people, people in g-strings and banana hammocks, people dressed up in costumes, people walking a small float, etc. etc. etc. And along the course, there are local bands playing, more people dressed up, people handing out jello shots, the homeless of San Francisco, religious groups broadcasting their messages, the aroma of the sweet leaf wafting through the air, people on their stoop eating breakfast, an Elvis impersonator and his band, disco balls out of someone's garage, and whatever else I missed.

Mary Kay, Debbie, Bill and I decided to participate. Bill has done it before but I am a Bay to Breakers virgin. For me, the best part is this. (Those who know me well, don't fall off your chair, ok?) I ran 90% of it and only walked 10% f the course - 12K or 7.5 miles!!Unbelievable for someone like me who hates endurance sports, running in particular. It started out as a slow jog to get around the slow walkers but then I just kept going, like Forest Gump. Next thing I knew, I was looking up at the dreaded Hays St. hill and I still kept going. At mile 4 I couldn't believe I was still alive and still jogging. It started to sink in that I may be able to finish the course running. It also helped that my brain was a little cloudy. Whenever I saw the markers, I thought that was the beginning of that mile. When I got to the mile 6 marker, I thought I had 2 or so more miles to go. When I saw the breakers on the Pacific Ocean and people on the sidelines cheering, it dawned on me that I was almost done. Holy cow! Ignorance is truly bliss. What d'ya know, it's true. 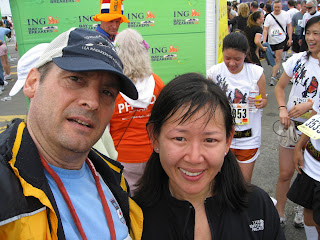 This was us at the end of the race, before I knew we had to walk another mile or 2 before the day was over. 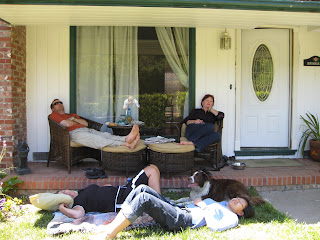 This was us at MK's house, after our run.
At the end of a fabulously energizing and life affirming weekend (albeit sore legs and shoulders), I sit here and ponder what the future holds for me. My life with Bill is good. We have love and laughter and health. And I go into this upcoming week knowing that I will be holding Dylan at this time next week. I will bring this baby home sooner or later because he is all we need now and we are ready to go up the Hays St. hill next year with a stroller.
Posted by Ivy Lee at 7:06 PM

Sounds like the run was an adventure!!!
Karen D

What a great story, Ivy. It was a glorious weekend, here, wasn't it! You really made the most of it. But doesn't today's news just KICK LAST WEEKEND'S ASS?!?!?!?

You brave girl!! Nothing like a challenge to get your gander up!! I bet it was fun!