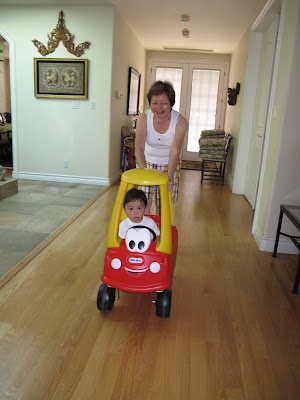 At Dylan's 18 month visit to the doctor, we were told he may have some speech delays since he only had 5 or 6 words at the time. I had been reading up on this on the internet (where else do google parents go to research anything?) and wasn't all that worried because he totally understands what we say to him. Regardless, the doctor suggested we called Regional Center of the East Bay to have them do an assessment.
Fast forward a couple of months and we finally got the visit scheduled. In the meantime, the week before his assessment, he started picking up words right and left, mostly monosyllabic, but words nevertheless. When the lady came to the assessment, she did not recommend any early intervention for him, just some pointers for us on how we can help him improve on his expressive skills. She wasn't concerned that he has any kind of developmental delays in speech or cognitive. What she did recommend was a full hearing test, and only because we told her he has had a few ear infections in the past year. Otherwise, little man is totally normal, advanced in some areas in fact.
As of today, it seems he just picks up works as he hears them, and I mean in context also. The latest cuteness is that he now says "please" when he wants something, unless in the middle of a full-on tantrum. He also knows to when you want him to sit and will say "sit" after you, especially if it means sitting in the big chair so that he can watch a video.
He has been saying the only two syllable word we have ever heard from him, which is "outside"
Other words he knows to say "meee" for mommy, "Da-eeee" for daddy, "wa wa" for watermelon, "juush" for juice, shoes, "da" for froggie (don't get it either but it is what he says when he wants froggie), "fru" for fruit, "hah" for hot, "mah" for more, "ka" for car, "choo" for train, and a bunch more I am forgetting. He says countless things we cannot decipher but he has full on conversations in Dylan Babble. So cute.
The latest in this little guy's activities is also climbing. He is into climbing onto chairs and tables, the sofa. retaining walls, his stroller, among many things. I am just waiting for the day he climbs out of his crib. That will be the day we either lower the mattress some more or convert it to a toddler bed.
The cutest thing I noticed lately is that Dylan likes little babies. As much as he is such a boy, throwing, grunting (no high pitched screams for this guy), banging on pretty much everything, pushing, he is so gentle when he gets in the vicinity of an infant. Than, he says "bee" for baby and touches the babies very gently. It is so adorable.
The last few mornings, we have been transferring him to our bed at around 5 am, just for some cuddles. At about 6 or so, he climbs down from our bed, finds my hand (or dad's) and then pulls on it so that we get out of bed to go with him out to the living room.
So life goes on in our humble little abode and as much as I hate the tantrums, I cherish this time because Dylan is simply growing up so fast.
Posted by Ivy Lee at 8:46 PM