Synapses Occurring Right Before My Eyes 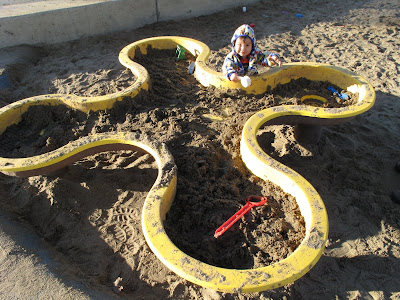 I gave Dylan too little credit today. We were at this really fabulous little kid park in CV where there was a giant sandbox and a bunch of general use sand toys. Naturally, some of them were broken, and naturally Dylan found one that was sharp-edged and unsafe for him to walk around holding, especially given his topply, swaggering, pseudo-running, in a drunken sailor way of toddling about. Perhaps it may even be considered walking ;) He was standing against the concrete wall that contained the sandbox. That's the wall behind him in the photo. So, what better way to get him to give it up than to bait and switch him? I gave him a white measuring cup that I knew he liked earlier (same one he is holding in the photo) and Bill pulled the other one out of his hand. Bill put it on the other side of the wall where he could neither see it or get to it. Great, we thought that was the end of the bright green and dangerous plastic shard.

We were wrong. We expected that if really wanted the darned thing, he would throw his butt down on the sand and cry alligator tears. He has been doing that a bunch lately; it seems to be a new thing he is trying out. This time, he didn't break out into Mr. Drama Boy. Instead, without skipping a beat, he turned, walked along the wall about 30 feet or so to the opening, then walked carefully up the little step onto the concrete, followed the retaining wall on the outside perimiter until he got to the spot where Bill dropped the green shard. He then picked it up and continued to play with it as if nothing had interrupted him. He knew exactly where it was and how he was getting there. I think the only worry he had was whether or not we were on to him, and would snatch him away before he can fully execute the heist.

We just stood there totally amazed. I gave him so little credit. The gullible and easily distractable little munchkin is way smarter than we thought. I've been reading that their brains are making crazy amounts of synapses at this age but I didn't expect such a carefully, yet so effortlessly executed plan to come from this 15-month old. Wow, I'm impressed.

Here are a couple of typical Dylan the Drunken Sailor shots. 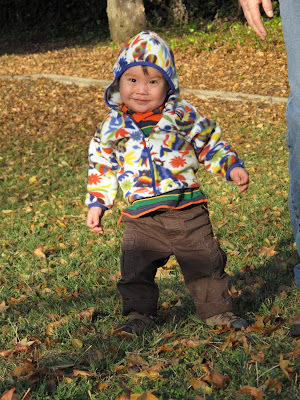 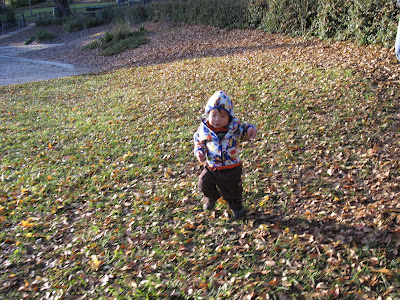 One afterthought in all of this - when we were in Tokmok, there were discussions from the orphanage staff regarding how weak his legs were and how they have been massaged regularly to no avail. I was told that hopefully, we can help him because nothing they did has helped him thus far. Fast forward to mid-November when at 13 and a half months, Dylan decided crawling was for babies and started walking. A month and a half later, this boy is almost running. No blame, no ill-feelings about any of them. I am just so thankful they were wrong about him at the orphanage and I hope one day, I can have the opportunity to show them in person that these kids come home to their families and just thrive like crazy.

Oh, we were told Ellie had that whole "no muscle tone" weak legged thing going on too. *smile* Girl is 9 months old and cruising along all the furniture, stands holding your hands, dances if you hold her fingers. The difference is, as you know, love. Lots and lots of one on one love. Dylan, as always, is a doll!!!

Hi Ivy and Bill - I loved reading about your fun Christmas. Your little sailor is adorable!
Karen

Oh so sweet.
Julia, our first, didn't start walking until almost 16 months--then it was literally a run! Mind you, this is the girl at 6 years old has her own personal skating coach because she is so good. Love is an amazing thing--as witnessed by Dylan, Mr Amazing!

So smart..So Strong and SoOOOO very cute! They are amazing aren't they?