We thought it would be really cool to bring Dylan to a pumpkin patch this weekend. Our original intent was to take him to Halfmoon Bay, where there are a few really cool pumpkin patches. When we got off the freeway and saw the traffic jam, we thought better of it and decided on a more local venue. Hence the pumpkin patch on the side of the road. Notice the all natural orange tarp. Dylan didn't seem to mind. He liked it all the same, which is what we figured. He especially liked going through the bales of hay that were stacked to form a tunnel. 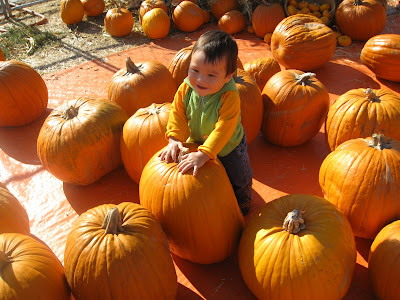 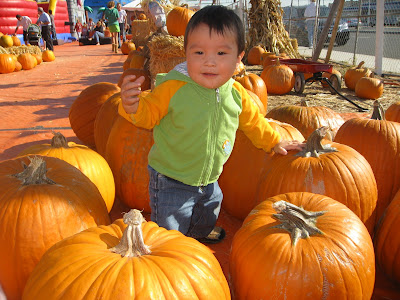 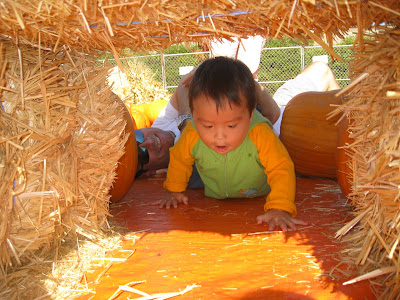 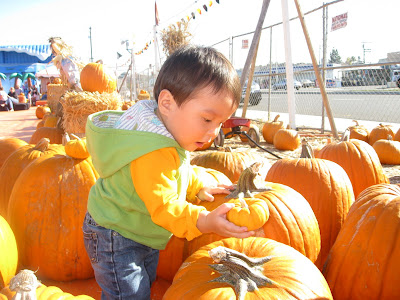 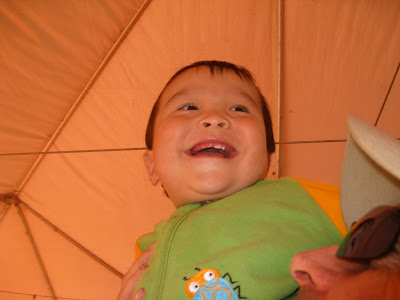 Notice the 2 new teeth coming in. There are 2 more on the bottom that you can't see on this photo. At 10 months, we were so worried they had not come in. Now, it seems it is all about teeth and learning to walk. 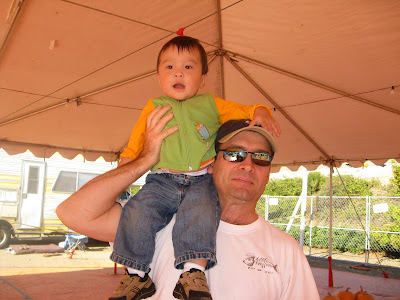 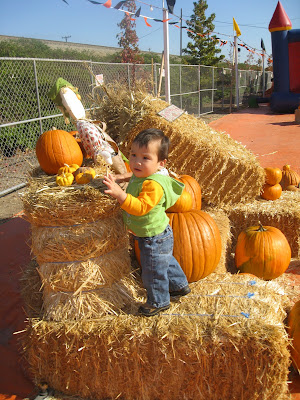 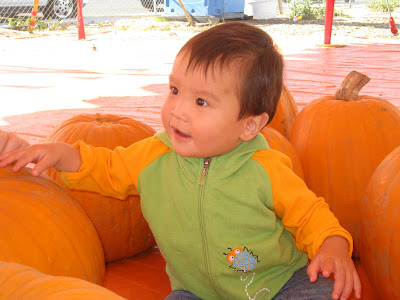 The pumpkin patch adventure really only lasted about half an hour. We headed over to the park nearby for an afternoon of fun. Dylan is really growing up fast. The more mobile he is, the more he enjoys himself when we are at the park. He is now learning how to climb, is starting to really like the slide and apparently enjoys a mouthful of sand. 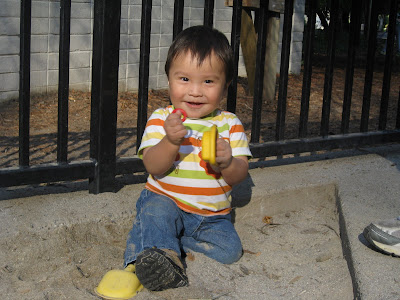 My little baby is gone and is being slowly (or not so slowly) taken over by toddlerhood. Just yesterday, we had our very first all out tantrum, over yogurt. He wanted more yogurt than what was in the container. I let him have a little fit on the sofa, then when he was calmer, I told him he couldn't have more yogurt just because he threw a fit. I gave him some other snack to munch on as I figured he was upset because he was still hungry. I wish we could communicate a little better. It must be frustrating for him to have very specific desires but unable to communicate it to us. Baby sign language may be the next thing we try.

He seems to have discovered the art of clinging to our legs these days. It seems the more independent he gets, the more clingy. It must be that new and exciting discovery of his own independence. It must be so exciting, but so scary at the same time. It's like when he stands on his own for a few seconds. The moment he realizes he is standing unsupported, he immediately looks for something to hold on to.

It is kind of the same for me. It is exciting yet scary at the same time. I see that my actions now play a part in how Dylan acts. At this point in his development, you really see when the lightbulb comes on in his eyes. Now, I really have to be mindful of everything, my sailor mouth in particular. Oh shit.

I love seeing those pictures of him! BTW, baby signing has been great for Claire. The first one I taught her was Help since I got so tired of her whining when she wanted something. She uses them a lot now - especially Thank You which I saw her sign to Olivia the other day. Now I hope those signs translate into words!
Karen

I'm laughing hysterically at that last statement...oh dear :) I am having to do the same thing with my classic saying/s. Sometimes not easy to bite that tongue!

You got some great shots of your little pumpkin at the patch. He's so cute and has some beautiful smiling eyes :)

What a darling boy! He looks great with the pumpkins.

How fun...wow every time I check in he has grown. Happy Fall!