I am finally home and have time and a consistent internet connection for some catch up posts.

I left for Bishkek on May 23 and after a small luggage fiasco that cost an extra $100 and a very uncomfortable stint at the Moscow Airport, I finally arrive in Bishkek. I was very very relieved that as soon as I came out of the baggage area, all bags with me, I saw smiling faces waiting for me. Karen who was to be my roomie for the next 2 weeks, and those of John and Julie Wright. I have never met these folks in person, but I immediately felt the warmth and familiarity. Because they were there, I also didn't have to deal with the pushy cab drivers.

We head out to Tokmok and find out that we are going to be living in what equates to a penthouse apartment in Beverly Hills in Kyrgyz standard. We are on the 4th floor and have a great view of the mountains from our bedrooms. We also have hot water, a flusing toilet, a laundry washer and a full kitchen. This is a nice home away from home. 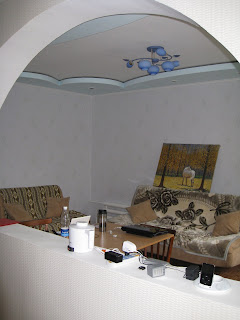 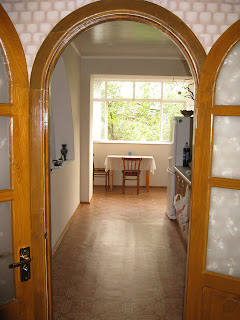 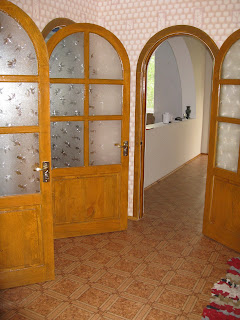 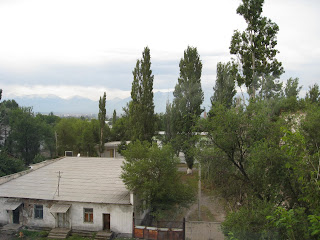 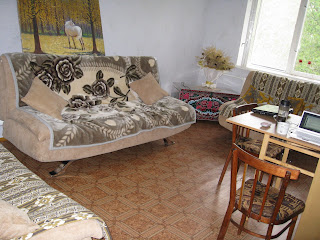 After a gourmet hearty breakfast complements of John, we found out that the director at the baby house was not around since it was a Sunday. Because of that we couldn't see the babies. Instead John showed us some local sights and we head out to the bazaar for some shopping and local culture.

The bazaar was a blast, even to overwhelmed and tired travelers. The colors and the energy were spectacular. There were rows of spices, produce, candy, cookies, houseware, babyware, live plants, animals, bread, You name it, you will likely find it at the bazaar. There were also carts scattered around the bazaar that offered frying food, choro (the local drink). There were people on foot, on bikes on some motorized bikes that of some sort that pulled carts of stuff around and just an all over buzz of energy. All this was happening even around closing time at the Tokmok bazaar. 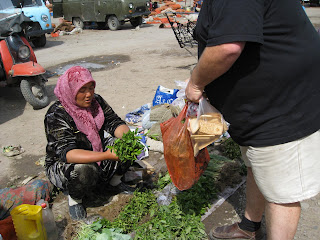 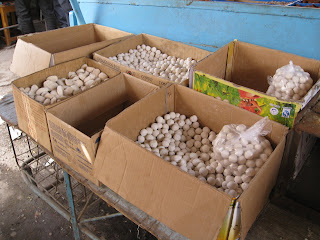 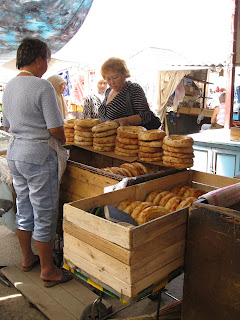 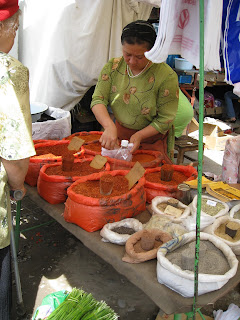 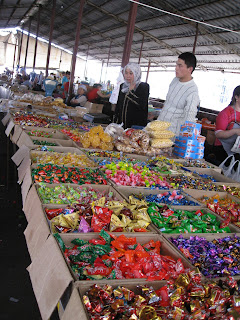 The following day was a BIG day for both Karen and me. John arranged to have Vlady, the husband of the local doctor, Tatyana to drive us around for the week. We are going to repeatedly be grateful for Vlady's help for the next few weeks. When we finally got to the baby house at 10, Saule our coordinator was there waiting for us and talking with the other Tatiana, the orphanage director. After what we have endearingly called “how's your mama”'s with Tatiana and Saule, we finally got to see our babies again for the first time in months. I had butterflies in my stomach but it was soon gone after they handed Dylan to me. Then I couldn't stop the tears from coming. He looked so much bigger than when we held him in December. He was still very cute and easy to smile. I fell in love all over again.

The Tokmok orphanage is a gated complex with several separate buildings one each side of the main path. Dylan's group was the first building on the right as you entered the property.

Dylan is just adorable. He is all smiles and giggles, a totally happy little guy, that is until he sees a camera. Then, he gets the stunned look on his face. He makes raspberry noises and bubbles with his mouth when he doesn't have his hand in it. He smiles back at you when you make funny noises to him and kiss his cheeks and tummy. He also likes to be held up in the air. It was unbelievable how totally all smiles this munchkin is. He only got fussy if you didn't move around with him after a few minutes.

The rest of the week was all about coming to visit twice a day. By Day 4 it just broke my heart to put him down on his crib before I left for the morning or for the evening. I just couldn't wait until we get to walk through the orphanage gate with him in our arms.

As for the visits themselves, I would get there around 10 am and he would either be getting disposable diapers put on him or he would already have one one because the caregivers were expecting me to show up. At 12 noon, I would have to bring him back for feeding time. They fed the babies some kind of rice porridge with bread broken up into the bowl and then some ground meat is also added to it. They are also given cups that had either water or black tea in them. They would sit Dylan on the chair with his arms also pinned to his side and then tilt his head back and shovel the food down his throat. I tried to do this for a couple of days as the caregivers thought I would like to do feed my child. I can tell he didn't like this at all. I could not stand the force feeding ritual and I would purposely leave before the food was ready. I simply refused to have Dylan associate me with this negative ritual. We were allowed to come back at 4 pm to 6 pm to visit again. At the end of this visit, they would also let me feed him a bottle. I liked that much better and would stay to enjoy this special time with him. 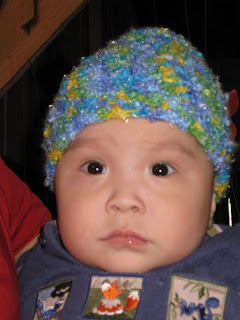 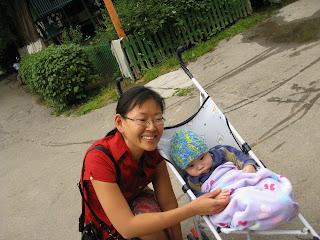 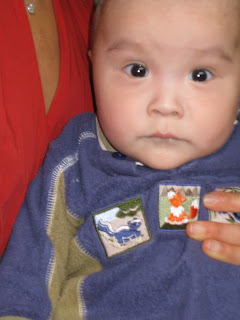 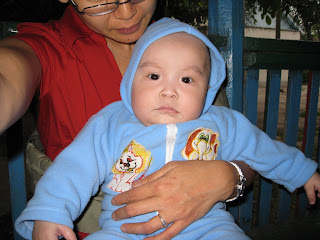 As for the Tokmok life, life is definitely interesting. At first, I was looking for what is different to life at home. After a short while, it became about what couple of things are similar because the truth is that most things are so different.

There are herds of cows crossing, or more like walking the roads. They do this 2x a day, once in the morning to pasture and then back home in the afternoon. There is a shepherd who takes everyone's milk cows for a fee. It's a lot like dog walkers an paper delivery combined. On the way back, the cows just drop off as they get to their houses and I suppose at the end of the route, the shepherd is left with no cows but his own (if he has one).

There are grocery stores and smaller neighborhood stores where one can pretty much get whatever they want. Nothing too unusual aside from the actual local foods we aren't used to seeing. The challenge is finding the items you need all in one store. It isn't unusual to go to 3 different stores on a small errand to find a couple of household items.

Toilet paper is an interesting commodity. The local toilet paper comes in quite interesting colors and has the texture of the crepe paper streamers we use to decorate our kids' birthday parties. I can't imagine wiping my delicate behind with it, so we usually opted for the more expensive kind in white that came in 4 and 8 ply. OK, we never bought the 8-ply. I just couldn't imagine needing 8-ply either. 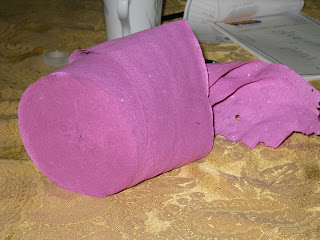 Toilet paper is quite expensive, compared to how cheap everything else is. We got a package of a dozen small rolls for $7 while you can eat at the town's finest restaurant Megapolis for 120 soms including tip. That is $3.50. John described the place as M&M for Missionaries and Mafia as those are the only people who can afford to eat there.

The cars on the road actually aim for you as you walk around town. Yes, do not assume they will not hit you in order to avoid a pothole. if the sidewalk has smoother pavement, then they will get first dibs on it. If you see a car coming at you, go into the nearest pothole to avoid being the next road kill.

Manhole covers are practically non-existent as they are stolen and sold for the metal. This is same with swings at children's parks. The only one that still has swings on them are the ones where a security guard is paid to watch the place.

Outside our apartment complex is our dump. We don't have a view of it but when we visit with the Wrights, we get to witness the sad reality. There are people rummaging through the dump. They look for food to supplement their diet. Some of these people aren't homeless Rather, they do not make enough money to feed themselves. It is a reality check for spoiled Americans such as myself. I am definitely more thankful for my life the the things I take forgranted.

Overall this week was full of ... well, ... everything. It was just full and I am appreciative of the opportunity for this experience.
Posted by Ivy Lee at 10:59 PM

Thank you for this long post...it is very interesting to see how your stay was. You really got to experience the culture- I envy you that! Although I am sure I would have been homesick by the end of the first week! Cant wait to hear more about the rest of your stay.

Love your narrative! I think I need some of the pink toilet paper for Phoebe's first birthday party:) I love the looks of your apartment also-and thank you for the tidbit on feeding, no wonder why Phoebe screams for food around here!

Ivy, I'm so glad you're home safe and sound. And I just devoured this post. Can't wait to read about the next weeks experiences. The part about how they fed Dylan and the other babies their lunch broke my heart. I'm so glad he's home with you now.

Staying tuned for more-
Suzanne
from Cape Cod this week

Oh Ivy I have so much to comment on, but definitely Milana and Dylan were in the same room. I think she moved there sometime in March (when we were there she was in the littler babies room). She also got this rice cereal and although I never witnessed it we saw a child being fed while we were there the one day to pick her up (I think they were about to feed Dylan too) and it was sad, to this day MIlana still isn't used to a spoon, and who would blame her ??? I think she is warming up to it, but we don't push it. While we were getting Milana changed to take her with us, we did see Dylan in his crib too. Oh I have so much to talk to you about since you got to see the day to day care with Dylan in this room and with those caregivers! Love your apartment, it looked sooo nice :) Hot pink toilet paper??? that is funny. Take care!